Alex Rodriguez is the co-founder and CEO of Workmand, a platform that connects small businesses with local contractors on demand. The 21-year-old is also the entrepreneur in residence at COCO in Minneapolis, Minnesota – the youngest EIR in partnership with Google for Entrepreneurs and CODE2040.

Not only does Workmand connect small businesses with contractors, but helps to simplify the logistics as well by taking care of transactions through the platform, saving entrepreneurs time and helping local contractors connect with new customers. 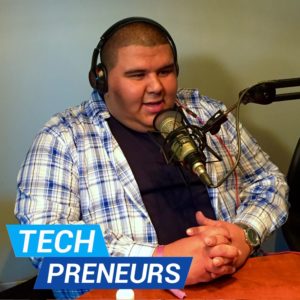 Rodriguez’s father owns a small construction company, and Rodriguez had long had dreams about running his own business, too, whether it would be a clothing company or a construction service like his dad’s.

It wasn’t until four and a half years ago as a senior in high school that Rodriguez decided he wanted to marry his family business with something he used in his everyday life: technology.

“I did it, really, by talking to a few friends, some acquaintances who own small businesses, and I noticed that the most valuable asset to small business owner is time. They’ve got a million things to do, and if they’re doing a task that they don’t specialize in, they’re really wasting their time,” Rodriguez said.

As an EIR in partnership with COCO and CODE2040, Rodriguez will work not only to build up Workmand, but also to be a leader in promoting diversity inclusion in Minneapolis’s tech startup industry.

It’s a mission that Rodriguez has been interested in since he first started attending startup events and noted that he was usually the only person of color or Latino in the room.

In order to promote the diversity Rodriguez wants to see in the future of tech startups, he has challenged himself to be a leader in it, using Workmand as an example for other businesses to follow in building an inclusive tech community.

“It’s one thing if I grow a successful startup, but if I’m showing a lack of diversity inclusion, I look at it as a failure because I’m excluding my people, I’m excluding people who I associate myself with,” Rodriguez said.

By not hiring diverse teams, big companies are missing out not only on growth opportunities, but also talented underrepresented groups who may go work for competitors or in other industries, Rodriguez said.

“Just being a platform to connect people? That’s really not enough. We really need a place where people have the resources, the opportunities, the capital to go on and do their own startups, to get internships, to get jobs,” Rodriguez said.