And she’s doing it a conversation at a time. 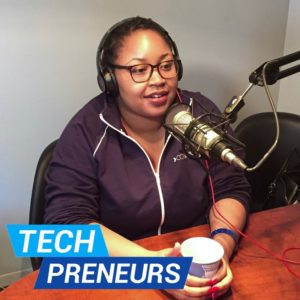 Reed is the CEO of Kollecto, an affordable art recommendation service that takes into account a viewer’s personal information and tastes, and the entrepreneur in residence at Grand Circus in partnership with CODE2040.

Reed hadn’t always intended to become an entrepreneur. She spent her time pursuing various interests while getting her undergraduate degree at Columbia, all of them connected by business strategy.

It wasn’t until Reed took a job with Google Offers as a business analyst that she fell in love with tech, “by accident,” she said.

“The finance world I was in didn’t have ping pong tables, didn’t have this really open airy culture, and I found that I worked really well that way,” she said.

Reed planned, at this point, to work her way up the corporate ladder, working with FourSquare and later Microsoft after leaving her internship at Google. Kollecto started as a side project and a Tweet from a friend about Orbital, a side project accelerator bootcamp hosted in New York.

“What was cool about that was that I got a chance to think about my idea as not necessarily something that was going to be this huge business— which is what I think the approach a lot of accelerators take— but to think about Kollecto just as a thing people will want to use,” Reed said.

At the time, Reed herself was in a transition, in a new job at Microsoft looking to surround herself with unique and interesting art that would be conversation-starters with her friends. As she started blogging about collecting art, she gained a following and slowly began to build her project around it.

Reed said she had always been into art in general, but didn’t get involved with visual art until college, and didn’t have a huge interest until she started at Microsoft.

As Reed got Kollecto off the ground, her ultimate goal was accessibility.

“From day one, I wasn’t necessarily trying to start a tech company,” she said. “From day one, we piloted this and I made a landing page and I went out to find people who were interested in getting help from a professional art adviser.”

As the business continued, it became apparent that parts of the process could be automated. At the time, there was no platform for gallery owners to target art collectors who might be interested in the specific style of their goods. Kollecto made it possible for art dealers to bring their art to the people, not the other way around.

Young and building a program the likes of which had never been seen before, Reed did her best to strategically minimize the risk as she built her site without code, sought validation from industry professionals and conversation with the people she’s helping to find art for.

“The things that have worked for me with Kollecto have been building a service first and then understand building the technology around it second. The reason I say that is because if you build just the technology first, you go head down into your computer and don’t talk to your end users. When build a service, you’re forced to talk to your end users and that was something that, when I built Kollecto was shaped around that,” Reed said.

It’s this experience taking user input on the front end and integrating it into the Kollecto service that has made her uniquely qualified to help others do the same thing.

An an entrepreneur in residence, Reed will examine the discrepancy between the high percentage of people of color and minority groups in the general population of Detroit and the low percentage in the city’s tech industry, discovering what barriers people have encountered in entering the industry and asking tech employers why the discrepancy is as wide as it is.

“Build a service first. I think that directly relates to the things we should be doing in Detroit and the things I’m going to be working on in Detroit, is that there’s a lot of dialogue and conversation that needs to happen around this topic in the city that’s not happening yet,” Reed said.

“So before I go out and build a bunch of programs or build—I dunno— any sort of platform or fancy anything, I think we need to have this conversation with constituents. Why does the Detroit tech industry look this way? What do people feel like the barriers are, and we can be better equipped to tackle them.”

Learn more about CODE2040 and its mission of diversity at CODE2040.org.