Founder and CEO of TINSEL Aniya Williams is making tech more accessible to women in a very literal sense by creating jewelry that blends everyday technology seamlessly into stylish outfits.

At first glance, the company’s first product, “The Dipper”, is long-chained gold or gunmetal necklace with a chevron pendant and a long, multi-layered chain. However, the innovation also houses a full-functioning pair of earbuds, complete with a 3.5 mm jack that doubles as a clasp. 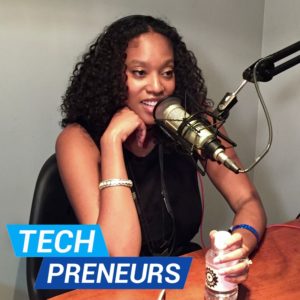 It’s a creative solution to a problem that many women face: tangled headphone wires in the bottom of a full purse, where tech can often be lost or damaged, Williams said.

And that was the conception point for TINSEL, which was inspired by Williams’ time at Voxxer – a company that makes walkie-talkie app for smart phones based in San Francisco, where Williams would later get involved with Galvanize.

Williams started as a part-time office manager, aiming to get more involved in the tech industry, adjust to the West Coast after moving from D.C. and to meet new people. She ended up staying for three years, running the marketing team by the time she left.

Working at Voxxer often meant that Williams would have to listen to audio for the app’s development or listening to music in her work environment.

“I had this pain point of I consider my headphones to be what I call a ‘modern-day essential.’ It’s not food, water, shelter, but I need them everyday and it’s a great inconvenience to my sanity and productivity if I don’t have my headphones,” Williams said.

But Voxxer isn’t the only connection to audio in Williams’ life. She is also a classically trained singer and on the board for Women’s Audio Mission nonprofit, which works to provide more opportunities for women in the audio engineering industry and owns one of the only recording studios owned and run entirely by women.

The goal of the program, Williams said, is as much about getting girls and women educated and involved in tech fields as it is about exposing them to other women in the industry.

“The theme of audio sound and theme of women. My product is for women, I’m all about providing opportunities for women and minorities in general, as myself being a black woman,” Williams said. “These are the diversity angles and a really common thread in my life as well.”

Increasing diversity in tech is becoming a forefront of conversation, Williams said, and is becoming something that people want to understand more and more.

As the entrepreneur in residence with Galvanize in San Francisco in partnership with Google for Entrepreneurs and CODE2040, Williams said she is excited to help to bring diversity into the tech industry of Silicon Valley.

“There are times when I can go days without seeing a black person walking down the street, not including homeless people,” Williams said. “It’s like, where are they? They’re not in San Francisco.”

Though diversity may not come without a few growing pains, it’s important to realize the importance of having people of different backgrounds adding their thoughts to the tech we use in our everyday lives. By forfeiting diversity, companies forfeit culture and innovation in their product, Williams said.

“You don’t want to have any major industry that’s growing in this country be exclusionary,” Williams said.

Progress is being made slowly, Williams said, primarily because minorities are not alone in promoting diversity in the industry.

“It seems like more and more people on the other side that want to understand and they want to know what I can do. They recognize that they come from a place of privilege and they want to be able to balance and level the playing field as I should say. I have a really, really great outlook on how it can alter it now,” Williams said.